Mrs. Lam Thi Phuong Thanh emphasized, over the years, along with the positive development of the two Vietnam - China, the friendship and cooperation relations between Lang Son, Quang Ninh, Cao Bang and Ha Giang provinces of Vietnam and Guangxi (China) in general, between Lang Son and Guangxi specific continue to achieve many important results, bringing many practical benefits for people of both sides. Lang Son itself every year has attracted nearly 3,000 Vietnamese enterprises to participate in import and export activities, with total import - export turnover of between 6 and 8 billion USD per year. In particular, in 2018, the official announcement of the opening Chi Ma – Ai Dian bilateral border gate pair witnessed by the Deputy Prime Minister of Vietnamese gorvenment Vuong Dinh Hue continued to affirm the development of cooperation between Lang Son and Guangxi in particular and Vietnam an China in general; thereby contributing to further strengthening the cooperation between the two sides, especially in promoting goods trading, tourism cooperation and people exchange. In 2019, Lang Son province was honored to host the Early Spring Meeting in 2019, this is a local-level cooperative program that is highly appreciated by the ministries and central branches of Vietnam. She also expressed her belief that Early Spring Meeting Program between the Provincial Secretary of the four border provinces in Vietnam and Guangxi, China will be maintained regularly, more effectively and practically. 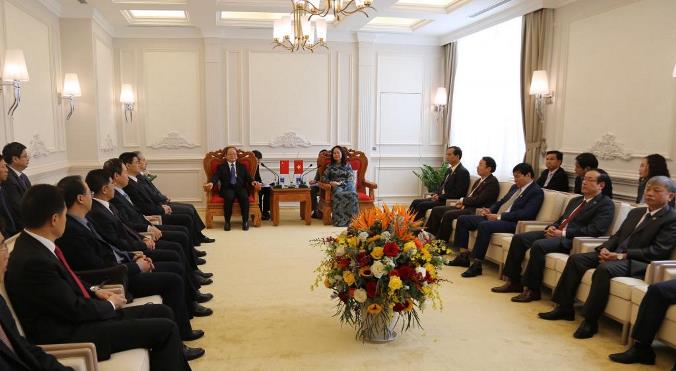 Overview of the courtesy meeting