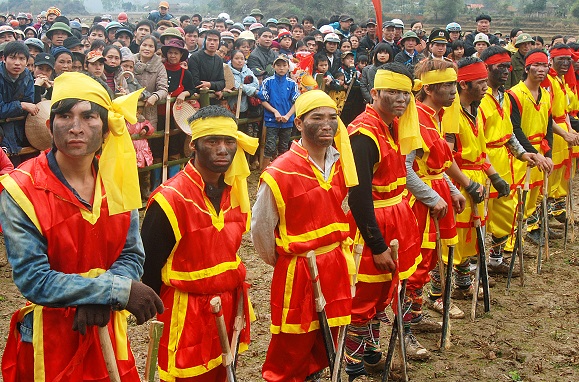 The festival is a ritual, rituals of worshiping the royal family associated with the war against the village and the cultural activities, games, performances of the Tay Tran Yen Son district. During the festival members smear on the face of the face of the enemy "Tac Tai Ngan" when alive. It is also the view of fellow souls, the spiritual world. Participants in the festival must be smear because they believe that doing so will distract evil spirits. Throughout the festival, no one will know who has replayed their appearance and defeat of the villagers. They catch on the scourge, plague them with their families and relatives.

Na Nhem festival takes place on January 15 (lunar calendar), but preparatory work has been carried out since two weeks ago. From the 1st lunar year in the ceremony, the worshiping ceremony of King Hoang. The old man held a meeting and handed over lock, lock mo, lock between the old and new year. Then discuss and prepare the work related to the festival such as the establishment of organizing committee, preparation of funds, human resources; assigning people to play and rehearse roles, prepare costumes, props, prepare gifts ... and other conditions to serve the festival. All work must be done before the full moon day, in which each group of participants clearly defined the number and content of work.

Along with the ritual activities in the festival, there are also many special games such as fighting game and pay tribute, After this game in the festival, Agriculture - Industry; Ngu - Tieu - Canh - Muc (cocoon mulberry, cocoon); swing, chess ... in order to meet the needs of enjoyment, cultural exchange of the community.

Na Nhem festival is a festival with the form of activities of community cultural beliefs and should penetrate the spirit of democracy and humanity deeply. It also represents a long-standing cultural exchange between Tay and Vietnamese, Tay culture and Chinese culture. Now after more than 50 years of disruption, the festival has been restored and re-organized annually to meet the needs of cultural exchange and enjoyment of the people.