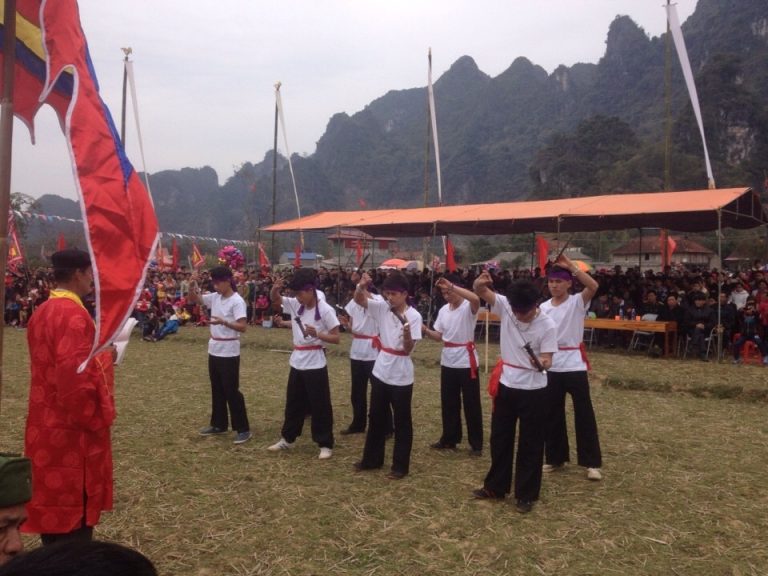 Legend has it that: Giang Giang village has a demonstration of the process of fighting the enemy to save the country from the yoke of the Western Han (Army of Three Generals). There are two high priests, Thanh Lang Cao Dieu Cat and Vu Loi Duke.

When fighting, two saints send 8 generals divided into two armies in two directions to fight the enemy. The first army was invaded by Duc Thanh Lang and 4 generals fighting at the "Cay Vong" pass. The second army led by Vu Loi and four generals advancing to the field "Huu Lien" to fight the enemy. These two generals had the battle to win the battle, arrested general Ngo enemy, then canonized at Son Loc Pagoda (Son Loc Tu) and Vu Loi Cong. The spirits of the two saints bless the villagers are expected. So Giang village two years to open the meeting Wu to celebrate, remembering the generals who have been fighting the enemy to save the country. At the festival, eight swords were set up by the eight boys to rehearse the battle. Eight sword sword from this is a few hundred years still used to play in the Assembly and very responsive so Giang should hereditary father to protect the future forever.

According to the custom, once every two years, Giang village held the Wu meeting on the 10th lunar month. The festival takes place on a large field, located in the center of Giang village surrounded by four mountains of the great viet. In the morning of January 10th, the procession with the eight generals of the Diamond, gongs, drums, trumpet, bar to the pagoda and the procession of the throne to the festival.

After the end of the ceremony, is the performance of the festival, starting with a dance (Sword Dance) with the content: Determined to practice to fight the enemy; Practice martial arts proficiency to fight the enemy. Game of Thieves, Game of Demonstration, Game of Cocoon, game of rainbow reappearance, Game of re-planting of rice, Reproduction of mulberry farming. Along with the above games, the Wu games also have swing games, throwing longer, go stilts. At night, villagers organize cheo singing with ancient plays such as Luu Binh - Duong Le; Tong Tran - Cuc Hoa; Kieu ...