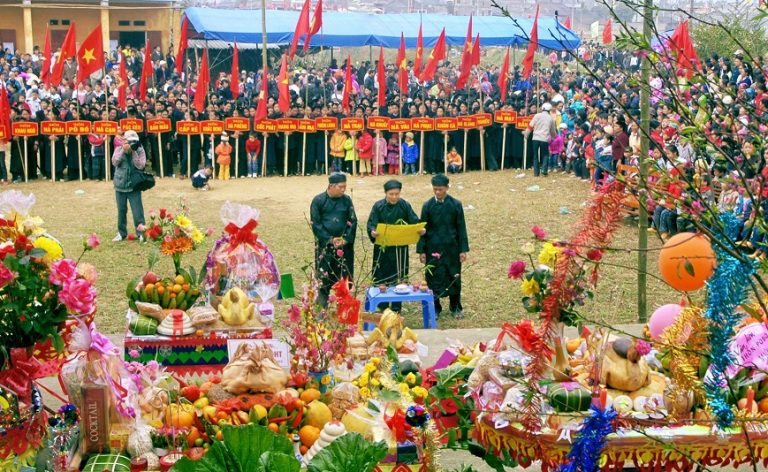 Bo Kham is a puddle in Na Phai village, Dai Dong commune, Trang Dinh district. In the past, this place was a large pool, the water flowing throughout the year. Now Boi Kham is just a small puddle, the remnant of the sand dunes in the East and the rocky west, on the face of the table "tables eat" is a playground of the ancient Tien that.

The festival is held in two adjacent areas. The boulder in the west Boi Kham and the land in front of it is where the ceremony and singing folk. Top level is to three altars and angelic pig. Early in the morning, Mr. Mo and his entourage brought the ceremony to the shrine of terracotta light ceremony ceremony. Mo's altar with baskets is placed in the shack. Three altar altars on a rock were also placed at the table: a boiled chicken, a bowl of dry bread, a bowl of sirloin, a bowl of thirsty wine, a bottle of wine, a teacup and some cups. some pairs of chopsticks. The altar of the fairy goddess is placed in the middle with a veil.

The villagers worshiped the ceremony, the village lion to worship Than Than, Than Nong, then the village to dance to welcome the lion team to attend. The people of the villages sang singing, sli, gliding, and singing ... along with the games, tossing, playing chess, sowing lobster, rice paddies ... The focus of the festival "Kham Kham" fortune. This is a very unique and unique folk game held at the festival "Bo Kham". Loc was scattered down, her children and visitors tossing contest each other picked up, the inspirational, the inspirational, who sit and run away, hands and feet together to collect the holy. People who think that many picked up the fortune that business will prosper, family warm, happy, peaceful.