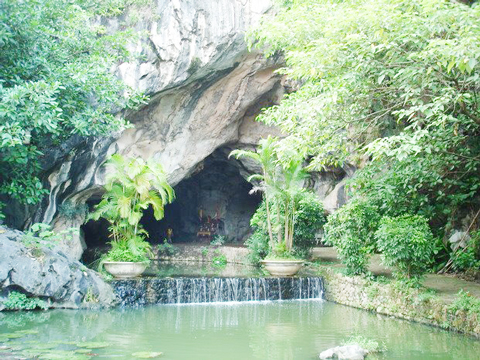 Nhi Thanh cemetery was discovered and embellished by Ngo Thi Sy when he became Quan Lang Tran Son from 1777 to 1780. He made great contribution to the development of land, peaceful livelihood and construction of Lang Son is crowded commercial area. During his stay in the area, he discovered the Nhi Thanh cave and built the Tam Giao pagoda, Dinh Quan, Thach Mien Am, Thuy Tuyen Hien, and Trai. Ngo Thi Sy is a native of Ta Thanh Oai village, Thanh Oai district, former Ha Tay province. When he passed the ceremony, in memory of his homeland, he used Thanh's words for his nickname: Nhi Thanh layman and later discovered Nhi Thanh, he used the name My name is Dong Nhi Thanh.

On the right side of Nhi Thanh cave is Tam Giao Pagoda, built by Ngô Thì Sỹ in the year of the Pig (1779), Confucianism, Taoism and Buddhism. At present, there are worshiping shrines such as Cung Cung, Holy Mother Palace, Cung Son Trang and Tam Bao Palace.

To the left of Tam Giao Pagoda is the entrance to Nhi Thanh cave, where there is Ngoc Tuyen stream in the heart of the river with a length of about 600m, the remains in front of the gate make up the poetic Ao Nhat Bich.

Nhi Thanh vault is the statue of Ngo Thi Sy was carved into the cliffs like the scene. On the cliff of the cave Ma Nhai beer system captures the autograph of generations of people with the main content is to praise the natural scenery and people of Lang, record the discovery of the construction of Nhi Thanh and temple Three Sects of the Pre-human. Going about 100m, crossing the two bridges over the streams winding open a large space with the roof of a high, there is a waterfall falling along the rock slabs to integrate with Ngoc Tuyen stream flow underground. dynamics make the sound mysterious. There is also a wide area called "the stage", the light from the mouth of the Thien Thien illuminated. At this stage, Ngo Thi Si used to party and treat poetry and singing programs. Going in, going to "stalactite gardens" with many stone pillars standing on the edge of the stream. Helped to get the ceiling, many stalactites, stones as high as the large curtain on both sides of the wall, creating a wonderful natural scene. Dive into the cave, across 3 bridges to the back gate to the outside. From the back door of Nhi Thanh cave, tourists can see the Tam Thanh cave entrance which has a walkway from Nhi Thanh rear gate to Tam Thanh cave with a distance of 500m.

It is a magnificent scenic spot along with sacred Tam Giao pagoda and rich beer system, the hope of Nhi Thanh will satisfy the needs of sightseeing, spiritual needs and scientific research of the masses. people and tourists cross the.